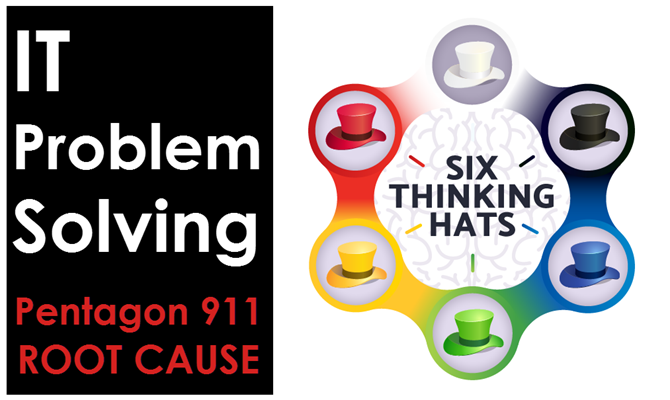 The Pentagon was locked down; our team was escorted by heavily armed forces outside the emergency perimeter, through security and past the office of the Secretary of Defense until we arrived in the basement entering the network control center where we would assist in communications recovery after the 911 Pentagon disaster.

No need to fear an accurate definitive irrefutable diagnosis – unless you don’t want the true root cause!

Our five-member team of Forensic Network Security Analysts started solving communications problems caused by the damage. While the nation was in shock we felt honored to be called and recommended by both Meta and Gartner Group at the time.

The team was made up of the highest caliber network technology troubleshooters, field tested solving complex problems for Fortune 500 and government organizations, trained over 50,000 network technologists in 27 countries and certifying over 3,000 as Certified Network Forensic Security and Problem Resolution Specialists – Certified NetAnalysts.

Step by step we diagnosed communications problems within the Pentagon and between other critical sites. In this article, I will use the Six Thinking Hats Methodology/Model to describe part of our process. I will begin by describing the model and how it offers effective ways to deal with IT Problems.

Each of the Six Thinking Hats describe different ways of thinking about the same problem from differing perspectives, motivations and personalities. Every person has one or more of the six hats as their default personality and their angle/agenda that creates competing opinions. Six Thinking Hats methodology helps us appreciate varied perspectives and harness all the benefits of diverse thinking. Sometimes this is referred to as parallel thinking allowing problems to be solved without long “linear” meetings sidetracked by participants with opposing agendas and personalities. Essentially this way of addressing problems uses all participants, their default personalities and agendas in an organized manner. Here are the Six Thinking Hats:

Our first meeting was to gather information. That would be a “White Hat” function, starting with a “Blue Hat” organization agenda to establish priorities and create a process. The idea behind Six Thinking Hats is to harness each thinking style without allowing any one style to dominate. So imagine a meeting where all Six Thinking Hats are involved. The order of the Thinking Hats start with the Blue Hat to bring about order. But rather than look for a Blue Hat person per se, everyone in the meeting works to be the best Blue Hat possible. That means regardless your typical hat, we all play the role of a Blue Hat thinker as a group, and if there is any competition, it is to be the best “Blue Hat” thinker even though we may typically be a different Hat color by default.

We agreed that we would determine the facts and create a process to organize our efforts. That meeting used Blue Hat, White Hat and looked at Red Hat to check in with everyone as to how they felt about the process.

White Hat process looks at the facts. Where was the Pentagon damaged? What communications were impacted and what were the priority of troubleshooting efforts? The first fact was that the online network diagram system was damaged and diagrams had not been printed for disaster recovery, so that meant using giant white boards to diagram from collective memory to bring everyone up to speed. This was not a time to critique, but a time to use the best minds to bring everyone up to speed, making a priority list and start working the priorities.

The first meeting was a success, our team worked with dozens of others that had already been working around the clock, were tired and we provided skillful aid. The building was still burning and the smell of smoke everywhere.

As problems were resolved and systems started working through alternate circuits and backup systems we used Green Hat to discover lessons learned, how things could be done differently in the future and Yellow Hat to use those lessons learned in a positive manner to improve the future outlook at a difficult time.

Critical complex problems require deep packet analysis. Capturing packets is rarely easy in large network environments. We had to use network taps and network switches to gather packets. Looking at network traces is easy, reading and interpreting packet traces requires knowledge of deep theory, communications protocols, timing, applications and the ability to use analyzers skillfully. As an instrument rated pilot I often let right seat passengers hold the aileron controls as we take off. It makes it seem easy – like looking at packets – anyone can do it. Few technologists that capture and look at packets are able to actually solve a problem – that’s hard and requires more than running software – like landing an airplane in the fog – it requires skills and knowledge few possess. Make sure your network analysts have tools and deep packet analysis training to solve problems before you let them “land your corporate jet” or diagnose your network security applications with the CEO on board.

At the Pentagon motivation was high at the time to accurately mitigate problems as nobody was on the hot seat for that disaster’s responsibility in the IT management team. On the darker side, other high stakes troubleshooting endeavors have proven that some very powerful people do not wish some problems to be diagnosed accurately, desiring rather to hide the root cause of problems because of who manages, or what pet projects or favored vendors might be implicated. I have been asked more times than I care to admit to spin an otherwise irrefutable definitive diagnosis to protect its implication. If there is any reasonable doubt, it too is reported allowing them to formulate their own conclusions. No need to fear an accurate definitive irrefutable diagnosis – unless you don’t want the true root cause!

Western thinking is based largely on Analysis, Judgement and Argument with strong ego involvement with the winner surviving criticism while maintaining adherents. This thinking comes from 1.) Socrates who points out wrong argumentatively, 2.) Plato who believed we see only shadows of the truth, as it is hiding, and 3.) Aristotle who’s thought promoted systematized inclusion/exclusion like “box” thinking.

Many other inputs to thinking styles exist, but the above illustrate our thinking is influenced by many things and we should embrace the variations and utilize alternate thought to solve our problems and reduce the time meetings consume.

Before a meeting begins the basic order of Hats should be set, but the order can be changed and returned to as needed to maintain a dynamic process. Only one Hat should be used at a time with all participants “thinking in parallel”. The power of all thinkers using the same Hat is powerful and moving a group or yourself through the Hats presents productive conclusions and team consensus.

If people are critical together it decreases the “black cloud” feeling of one critical person opposing a Green or Yellow idea. It also helps non-critical people do a better job thinking critically and vice versa.

If a participant wishes to “show off”, or be in competition, they should participate well in the Hat color in use along with others opposed to being contrary or out of current Hat thinking.

While playing the game, which is essentially managed removal of ego some rules apply:

A typical meeting might be set as Blue, White, Black, Red, Green, Yellow, Blue. No need to use every color in each meeting. After heated discussion or outcomes advise going through Red to see how people feel about the results.